Powered by the Franchise Broker Association 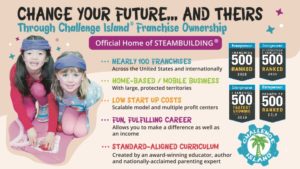 Over 100 Franchise Units in 27 States and 4 Countries

Well-Established Mobile Model Within Both Consumer and Franchise Markets

Nationwide Partnerships with the Girl Scouts, Boys and Girls Clubs, Unicef and many other Non-Profits as well as numerous Family Focused For-Profits